When I first started working with SCCM/ ConfigMgr a few years ago I ran into several issues with upstream teams trying to deploy Task Sequences to devices that were untested (i.e. there were no drivers), power was not plugged in, the user supplied hostname was duplicated in target domain etc. This generated unnecessary Incidents, and delays in getting devices out to users. I became increasingly frustrated at the lack of ConfigMgr built-in capabilities to address these issues, so I turned to vbScript to write a HTA / front-end to address these issues. vbScript is now, several years later, a dying technology, so over time I have re-written the vbScript/ HTA in PowerShell, leveraging WPF and XAML to generate a user interface. 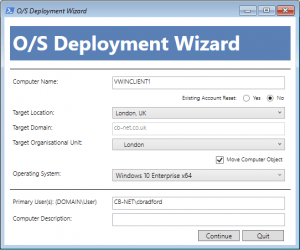 OSD Wizard is a PowerShell script with a WPF/ XAML-based UI built for use within System Center Configuration Manager (SCCM / ConfigMgr) Task Sequences – it has two key purposes, the second of which is optional:

You can read through the details of the project, download and review the source code (and even contribute!) via GitLab, here: https://gitlab.com/chrismbradford/osd-wizard