You can increase the displayed page width in the Twenty Seventeen theme using the following “Additional CSS” (can be found under Customise > Additional CSS).

To modify the percentage of the screen that can be used change this percentage **only** – the other percentages affect padding/ borders etc and will affect how appears on smaller displays.

Full Additional  CSS to add to your site set to 70% width:

Enabling SSL within WordPress is not a simple task if you rely upon the “flexible SSL” offering from CloudFlare. You will end up with SSL infinite redirects and will likely be unable to get into your admin interface without editing config files.

Getting this to work though, with the help of a plugin, can be relatively straight-forwards.

First, you need to install the following plugin on your WordPress installation: https://wordpress.org/plugins/cloudflare-flexible-ssl/

Next, within the CloudFlare configuration for your domain, browse to “Page Rules” – you want to create a new Page Rule: 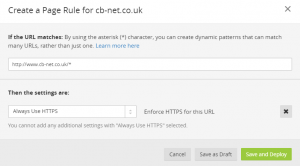 That’s it.. browse to your site’s URL and confirm the traffic is automatically redirected to HTTPS.

You do not have to change the WordPress config – to re-enable HTTP access remove the CloudFlare rule.

So, I’ve just competed a move of CB-Net from Joomla to WordPress – the process was surprisingly easy, although there were a couple of gotchas I thought I would share, as well as the process from start to finish.

END_OF_DOCUMENT_TOKEN_TO_BE_REPLACED

Joomla : Using a CDN/Setting Up Your Own

Like me you’ve probably read the hype about Content Delivery Networks that keeps doing the rounds. Want to energize/supercharge your blog?!…heh.

Still, being in the mood to improve the sites I host I decided to give it a go and see if the reality lived up to the hype. I suppose part of me missed the feature I never got to properly try on iPage – the Akamai CDN plugin. This would probably have been easier to setup with that!

Why you ask? Well the science behind it is simple really. Most modern browsers support up to 6 concurrent connections per hostname (http://www.browserscope.org/?category=network&v=top), by using multiple hostnames you can download content in parallel, or put simply, using two hostnames would allow 12 concurrent connections for your site content, three would provide 18 etc. There are limits as to how effective this become, and most would suggest that you don’t go above four hostnames for your content. You’ve also got to have the bandwidth available to download using all of these concurrent connections so those poor users still on dial-up are unlikely to benefit much.

There are a lot of paid services from companies like Akamai, MaxCDN and Amazon, and there are a few free services from companies like CoralCDN, CloudFlare and Incapsula, you can also setup your own CDN (a very limited version of any of the previously mentioned companies) using a subdomain, I’ll also show you how to do this. Using a paid for service, like most things in life, will get you the most functionality, but that doesn’t mean that the others are worth a look.

For my requirements a paid for service wasn’t really necessary so I opted to try CloudFlare and also making my own subdomain and serving content from there. Again, as per my recent article on hosting companies, I’m not fussed which one you choose, or if you choose to use one at all in fact – I opted to use my own subdomain in the end. Why do I say limited? Simply because you’re still restricted to a single host really, and the same host if you follow my guide below. Using a provider like CoralCDN or CloudFlare you’re providing content closer to your users as these networks have servers around the globe as opposed to your single(?) server.

Many other options are out there, this article is designed to get you looking at what is available and testing a few of these options.

END_OF_DOCUMENT_TOKEN_TO_BE_REPLACED

Well that was easy… Move was completed today, no downtime… thank you Akeeba backup/kickstart – seriously good product if you are using Joomla, I even use it to create my dev sites. Took me less than 15 minutes to move this site, including the FTP transfers!

The site also seems to be a little nippier; so long Hostmonster, hello Bluehost 🙂

Its that time, I’ve had the renewal reminder and Hostmonster are offering renewal at an inflated price, as every hosting company does (and insurance company or that matter, whatever happened to customer loyalty?) – so I do what anyone would do and trawl the ‘net trying to find the best hosting deal out there.

Right… before we go any further lets make something clear. I have nothing to gain from this article, no allegiance to ANY hosting company. Currently the site your now reading from is running on Hostomster, why..? Because I didn’t have the time to review the hosting packages available to me at the time of last renewal… and before then, well Hostmonster was nice a cheap…. 🙂

Part of my issue with finding a useful host was the bulls**t review sites out there that, lets not hold any punches here, are obviously sponsored by the hosting companies themselves. I read too many biased reviews and saw far too many completely different ‘top 10 hosting companies’ awards that I lost faith entirely and took to pot luck… that was my second mistake (the first was reading the review sites…)

I host a small number of small sites with low traffic requirements, my requirements are not out of the ordinary – Joomla hosting pretty much covers it. From whatever hosting I choose I expect an intuitive interface, good support and above to get what I was promised.

Now where was I… ah yes, initially I come across the GoDaddy 4GH Ultimate package; features included (at time of writing) an SSL certificate, static IP and the usual unlimited bandwidth/storage (including fair use policy rubbish and all that you get with every shared hosting provider). So I signed up and started to transfer my data across… that’s when the fun started.

Firstly, the GoDaddy way of doing things appears to be to fragment the administration of hosting features into as many different control panels as possible… one for SSL, one for Email, one for Hosting… I’m not daft (at least I like to think I’m not!) but its a mess, period.

Next there’s no support for IMAP… huh?! This is an Ultimate hosting plan, they offer no better shared hosting… of course you can have IMAP if you upgrade your email hosting from the basic package supplied with the hosting deal (see where the separate control panels come in – email is essentially a seperate product from your web hosting).

The worst thing was however the level of additional customisation, and additional issues I had moving the site across. I kept getting the PHP ‘no input file specified’ when I was in the Joomla Administrator interface; this then stopped the entire site working for up to 20 minutes. Remember, this site worked just fine with the previous host. My encounter with GoDaddy support wasn’t inspirational either, I laid out all of the steps I had taken to try and resolve the problem myself using the .htaccess file, and yet was advised I should probably make some changes (all of which I had already advised I had done) to the .htaccess file… cunning!

I never got the issue resolved and had to rollback the migration; I’d been through every additional configuration I found on the GoDaddy forums, via their support and even trawling Google search results. I’m certainly not the first person to encounter this issue with Joomla (or Magento) running on GoDaddy shared hosting. Needless to say this was a nightmare.

Finally, there was the issue of performance. I’ll admit it, I was suckered in by the 4GH thing… the reality was that it was certainly no faster when the website I moved across was working, if anything it was slower. Experiential learning 0, stupidity 1 – lesson re-learnt on this occasion: when something sounds too good to be true it generally is.

So, here we are again… prices that look too good to be true, features that sound, well amazing for the money. The good news is that iPage support IMAP (at no additional cost!) and that they operate a single control panel (vDeck)… after GoDaddy this was a revelation. vDeck is not as intuitive is cPanel, but unless you’re particular about your control panels I think you’d get over it quickly enough.

The bad news came after I restored a site; no InnoDB support. What on earth is InnoDB you ask? Well I found myself asking just that very question. For a number of the sites I have built I use Rocket Theme extensions and Themes, some of which (RokGallery) require InnoDB. I didn’t fancy redesigning or rebuilding these sites with new templates and extensions, so iPage was gone.

In their defence the support response I got was almost instant, I liked the administration interface and loved the option to use the Akamai CDN for free, as well as the Site Lock subscription being part of the hosting package…. had they supported InnoDB that is where this site would be hosted today.

Lets face it people, the worlds economy is in a mess and money matters…. #rantover.

After a recent bout of Citrix problems there are some new troubleshooting tips and reccomendations which may suit your environment.

The VBScript section is also constantly being updated with new, automated management tasks that should make your life easier!

Take a look over here.

Welcome to cb-net.co.uk! Your source for Microsoft, Citrix and Network administration, configuration and deployment documentation ‘from the field.’

Feel free to browse the categories above, or view the most recent additions from the menu on your left. Be sure to check back soon as new administrative scripts, tips and articles are frequently added

NEW 27/09/2009: If you are looking for something specific try out the new search functionality here.